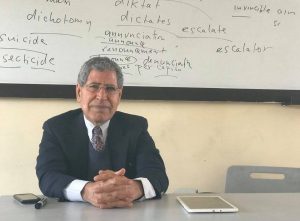 A powerful programme of talks, screenings and events has just been unveiled by the Bloody Sunday Trust and Pat Finucane Centre for the 47th annual Bloody Sunday Commemorations in Derry later this month.

Among this year’s events will be a special focus on Palestine’s Great March of Return with Dr Asad Abushark for the Annual Bloody Sunday Memorial Lecture on 25 January.

Almost 200 Palestinians were shot dead by Israeli military forces during the powerful wave of protests in the region last year known as the Great March of Return. Dr Abushark has lectured and written extensively on the Palestine question and the right of return. He is a visiting Professor of Translation and Linguistics from Gaza University’s Communication and Language Faculty, and the official spokesperson of University Teachers’ Association – Palestine.

Hosted by the Bloody Sunday Trust and Pat Finucane Centre – for details of other events takign place as part of the commemorations, see here.