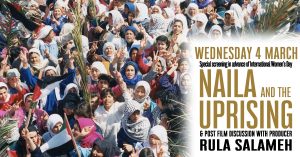 On Thursday 5th March you are invited to a special free screening of the highly acclaimed Palestinian documentary film ‘Naila and the Uprising’ in Room C124, Henry Grattan Building, DCU Glasnevin at 6pm. The film will be followed by a discussion and Q&A with the film’s producer Rula Salameh moderated by Dr Erika Biagini, Assistant Professor in Security Studies in the DCU School of Law and Government.