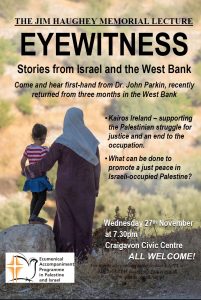 Craigavon Trades Council organises an annual lecture to commemorate Jim Haughey from Lurgan who fought with the International Brigade against Fascism during the Spanish Civil War and was imprisoned by Franco’s forces after the battle of Ebro. Following his release, Jim Haughey later joined the Canadian Air Force, and was killed in a plane crash in 1943 while again fighting against Fascism.

This year’s Memorial Lecture will be given by Dr John Parkin who is a retired Methodist Minister brought up in Skelmanthorpe, a west Yorkshire textile and coal mining village. He came to Ireland in 1971 to undertake geological research on the Dingle Peninsula, County Kerry.

He worked with the Geological Survey of Zambia before taking up a post with the development agency Christian Aid based in Dublin. He was ordained as a Methodist minister in 1988 and has served in Offaly, Dublin and Waterford. He was served as a food monitor for Christian Aid in Ethiopia in 1984 and 1998 and has been the convener of the Irish Methodist World Development and Relief committee.

In 1994 he was an election monitor in South Africa as part of a World Council of Churches/Vatican programme.

In 2016 he served for three months with the Ecumenical Accompaniment Programme in Palestine and Israel.

Currently he is the Chairperson of Kairos Ireland, supporting an initiative by Palestinian Christians calling for international solidarity to end the occupation of Palestine.

For more information please contact EAPPI on 020 7663 1144 or eappi@quaker.org.uk
www.quaker.org.uk/eappi