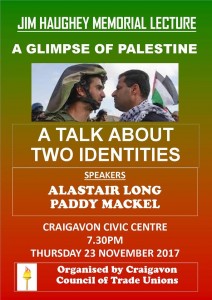 The annual Jim Haughey Memorial Lecture organised by Craigavon Trades Council will this year be on the topic of Palestine.

Entitled “A Glimpse of Palestine – A Talk about Two Identities” this year’s event, being held on Thursday 23rd November @ 7.30pm in Craigavon Civic Centre, will be addressed by Alastair Long and Paddy Mackel. Both speakers, who are active trades unionists, have visited Palestine in recent times.

This annual memorial lecture commemorates Lurgan man, Jim Haughey, who fought with the International Brigades in their defence of the Spanish Republic against Fascism during the Civil War in Spain.

Jim Haughey was incarcerated in one of General Franco’s concentration camps after the Battle of Ebro.

Following his release from capture, Jim Haughey went on to volunteer with the Canadian Air Force, and was killed in a plane crash on September 12, 1943, as he again prepared to fight the forces of Fascism.