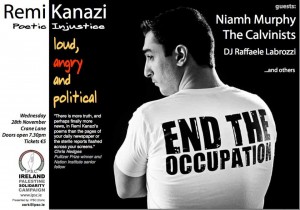 On the heels of a successful 170-stop Poetic Injustice tour, we are excited to share that Remi Kanazi will be touring Europe again and Ireland will be his first stop.

On the 28 November Remi Kanazi will perform in Cork, in Crane Lane, presented by the Ireland-Palestine Solidarity Campaign. Entry is only €5, and doors open at 7.30pm.

The event will also feature the renowned Cork singer Niamh Murphy and the acclaimed band The Calvinists, as well as the talented DJ
Raffaele.

It will be an unforgettable night of music and poetry in celebration of the resistance of Palestinian people against occupation and apartheid. Support the Palestinian struggle for freedom, come one, come all!

REMI KANAZI is a poet, writer, and activist based in New York City. He is the editor of Poets For Palestine and the author of the collection of poetry, Poetic Injustice: Writings on Resistance and Palestine. His political commentary has been featured by news outlets throughout the world, including CNN, Al Jazeera English, GRITtv with Laura Flanders, and BBC Radio. His poetry has taken him across North America and the Middle East, and he recently appeared in the Palestine Festival of Literature as well as Poetry International. He is a recurring writer in residence and advisory board member for the Palestine Writing Workshop as well as an organizing committee member for the US Campaign for the Academic and Cultural Boycott of Israel. . Remi has shared the stage with Amiri Baraka, Angela Davis, Alice Walker, Immortal Technique, Lowkey, DAM, Suheir Hammad, Tony Kushner, Mark Gonzales, Shadia Mansour, and many others.

NIAMH MURPHY is a singer from Cork. Her voice is a wondrous thing.
Her style has reached a place where her songwriting largely draws on contemporary western popular music underpinned by an original perspective on unmistakably Irish folk roots. Murphy’s vocals are most definitely demanding of well deserved auditory attention. The songs she writes are obscurely beautiful.
Through widespread performances and radio appearances her songs have been corralling enthusiastic listeners to her. One of Foxglove’s songs Winter was featured on an Irish Female compilation Cafe Irlandaise which was released recently and so far has received rave reviews in many of the national press. “Winter is epic”- 2 U I Bestow Land’s End was very recently shortlisted, out of many songs by Hotpress Magazine and has been making big impressions at home and abroad.

THE CALVANISTS are an original, energetic gypsy blues and alternative folk band from West Cork, Ireland. Their songs, laced with infectious harmonies and driving rhythms draw inspiration from the spirit of gypsy musicians and American troubadours, the energy of punk rockers and the eerie voodoo of the Deep South. Combined with their penchant for battering their instruments, belting out harmonies, yodeling, shouting and generally causing a ruckus, it makes for an experience to remember.
Since their formation in 2010 they have built a loyal fan base and a reputation for quality, energetic live performances. They have performed live on R.T.E (Ireland) television’s popular “Saturday Night Show” and have been featured on national and local radio stations. Over the past year they have toured in Ireland and in Europe, also performing at Electric Picnic and Indiependence music festivals.

Born in Teramo, a town in the centre of Italy DJ RAFFAELE got involved in the local and regional radio stations at the early age of 14, trying to satisfy his curiosity for media. During his high school years, he was DJ for student parties around his city, further developing his taste for the good music.
While in college, his connection with the local radio station increased. He produced direct and host radio shows, quickly becoming a well-known sport journalist. In 2007 he moved to Ireland with the idea of exploring new career paths. Since then, he has become the official DJ for after party nights in Limerick and Cork. In 2010 he became a DJ for the Apple music club of Cork.