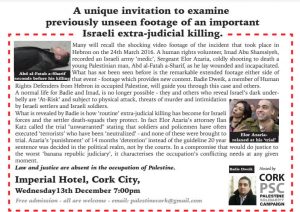 Many will recall the shocking video footage of the incident that took place in Hebron on the 24th March 2016. A human rights volunteer, Imad Abu Shamsiyeh, recorded an Israeli army ‘medic’, Sergeant Elor Azaria, coldly shooting to death a young Palestinian man, Abd al-Fatah a-Sharif, as he lay wounded and incapacitated. What has not been seen before is the remarkable extended footage either side of that event – footage which provides new context. Badie Dweik, a member of Human Rights Defenders from Hebron in occupied Palestine, will guide you through this case and others.

A normal life for Badie and Imad, is no longer possible – they and others who reveal Israel’s dark under- belly are ‘At-Risk’ and subject to physical attack, threats of murder and intimidation by Israeli settlers and Israeli soldiers. What is revealed by Badie is how ‘routine’ extra-judicial killing has become for Israeli forces and the settler death-squads they protect. In fact Elor Azaria’s attorney Ilan Katz called the trial “unwarranted” stating that soldiers and policemen have often executed ‘terrorists’ who have been ‘neutralized’ – and none of these were brought to trial. Azaria’s ‘punishment’ of 14 months ‘detention’ instead of the guideline 20 year sentence was decided in the political realm, not by the courts. In a compromise that would do justice to the worst ‘banana republic judiciary’, it characterises the occupation’s conflicting needs at any given moment. Law and justice are absent in the occupation of Palestine.