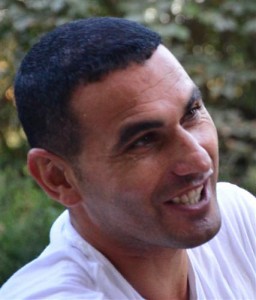 Mousa Abu Maria is a Palestinian activist and farmer from the town of Beit Ommar, a village located in the West Bank about half way between Bethlehem and Hebron, currently surrounded by six Israeli settlements. He will speak in conversation with famed Irish writer Dervla Murphy in Cork on Wednesday 15th May (Nakba Day) at 8pm in The Gresham Metropole Hotel, McCurtain St.

Mousa has spent several years imprisoned in Israeli jails, including a 14-month spell in ‘administrative detention’ without charge or trial.

He and his family have also seen large areas of their land seized by occupation forces and illegal settlements.

Mousa Abu Maria is the co-founder of the Palestine Solidarity Project, a Palestinian-run grassroots organisation committed to non-violent resistance to the Israeli Occupation. Since 2006 the Palestine Solidarity Project has been organizing regular demonstrations against Israeli illegal settlements, to protest the ongoing physical abuse and harassment of Palestinian residents of the village and the loss of their farm land and orchards as a result of the expanding settlements.

Organised by the Cork Branch of the Ireland-Palestine Solidarity Campaign.