[Cork] MIKO PELED: Beyond Zionism: A New Paradigm for Israel/Palestine 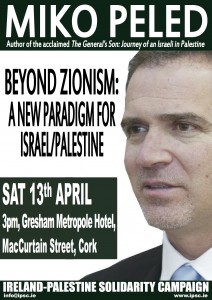 Don’t miss this unique oppurtunity to hear firsthand from an Israeli activist for freedom, justice and equality in Palestine and Israel. Copies of his book will be avaialble for purchase and signing on the night.