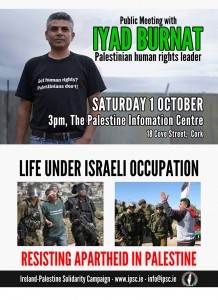 The Ireland-Palestine Solidarity Campaign is honoured to host a talk by Iyad Burnat, a Palestinian human rights leader. Mr. Burnat will speak on Saturday 1st October in The Palestine Information Centre, 18 Cove St, Cork at 3pm.

Organised by the Clare branch of the Ireland-Palestine Solidarity Campaign.