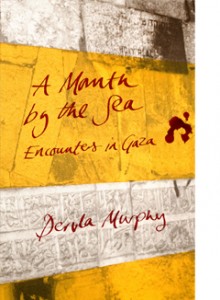 Dervla Murphy: A Conversation about Gaza in conjunction with the Cork Ireland Palestine Campaign and part of Israeli Apartheid Week 2013. The event takes places on Saturday 2nd March at 3pm in the Metropole Hotel, McCurtain Street, Cork City. Free entry and all are welcome.

Dervla Murphy has won worldwide praise for her writing and has been described as a ‘travel legend’ and ‘the first lady of Irish cycling’. Now in her 80s, she continues to travel around the world and remains passionate about politics, conservation, bicycling and beer.

Her most recent book ‘A Month by the Sea: Encounters in Gaza’, creates a vivid picture of life in this coastal fragment of Palestine.