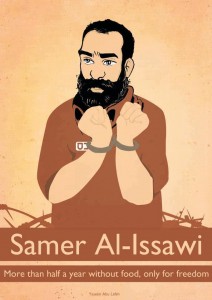 The people of Cork know a thing or two about hunger strikes. One of our Lord Mayors, Terence MacSwiney, died after a hunger strike of 74 days in 1920.

But Samer Issawi has already endured more than 250 days of hunger. Gradually turning into a ghost, he has slowed the process of bodily decay because, as well as drinking water, he is taking some vitamins and trace minerals.

The Kafkaesque nature of the Israeli occupation is such that Samer, whose home is in occupied Jerusalem, was arrested for taking his car to be repaired at a garage not far from his house – the garage was deemed “out of bounds” for him. The Kafkaesque horror deepened when the Israeli government announced that he should spend 26 years in prison, while preventing any possibility of a defence by refusing to make any specific accusation against him or reveal any evidence to him or to his lawyers. In protest, Samer went on hunger strike.

Knowing that Samer’s imminent death is their fault, and keen to avoid the odium of having him die in their custody, the Israeli government has offered to release Samer if he will agree to go into exile. But, knowing that the Zionist aim is to remove the Palestinian people, acre by acre, from the land of Palestine, Samer refuses to be driven from his homeland.

Invoking the memory of Terence MacSwiney, the Cork branch of the Ireland-Palestine Solidarity Campaign has decided to join Samer Issawi in his hunger for justice.

We cannot match the marathon effort that Samer has already made. But, by acting in relay, we will accompany Samer in hunger until his unconditional release, whether that comes as a result of his death or of his being set free to spend his last days as a free man in his homeland.

Our campaign will start at 1:00 PM on Saturday, 20 April. We will start our fast on Patrick Street, after sharing a small loaf of Palestinian bread. This will be eaten from a bowl made in Palestine from the wood of an Olive tree – the symbol of Palestine, but also the universal symbol of peace.

Later, the campaign will become a relay fast. The Palestinian Olive bowl will be our “baton”, passing from one hunger striker to the next until Samer is released.

We know that many others share our outrage at the evils of the Israeli Occupation and we invite anybody who feels able to do so to join our relay hunger strike.