[Cork] Film Screening: The Time That Remains by Elia Suleiman 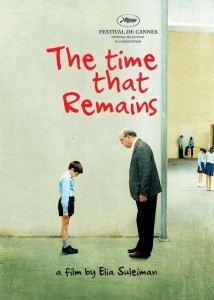 The Time That Remains is a semi-autobiographical film, in four episodes, about a family, Suleiman’s family, from 1948 until recent times.

The film is inspired by the director’s father’s private diaries, starting from when he was a resistance fighter in 1948, and by his mother’s letters to family members who were forced to leave the country.

Combined with Suleiman’s intimate memories of them and with them, the film attempts to portray the daily life of those Palestinians who remained and were labelled “Israeli-Arabs”, living as a minority in their own homeland.’

Suleiman begins the story of his family back in 1948 in Nazareth, when he was a child, and twists through the decades in four separate episodes, recounting torture, looting, exile and the resistance, of which his father, Fuad was an unofficial yet enthusiastic member, and finally, the acceptance of their fate.

Without pathos nor any political declarations, except to evoke the current situation ever-so-diplomatically, he avoids clichés by deploying both dark and light humor. But what makes the film touching are its unique and sometimes quirky characters, such as his parents, their alcoholic neighbor who, every afternoon, pours gasoline on his head and threatens to set himself on fire, or his mother’s Chinese caretaker who karaokes to Céline Dion’s ‘My Heart Will Go On’. Playing his own role, called simply E.S., the director never utters a single syllable throughout the movie. Not a man of many words, Elia Suleiman. He deploys the old adage “Silence is golden’, a very eloquent and thought-provoking one at that. Everything is contained in movements and expressions, subversive, light and poetic.