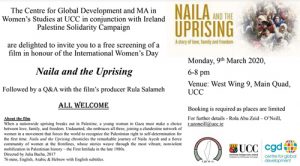 On Monday 9th March, the Centre for Global Development and MA in Women’s Studies at UCC in conjunction with Ireland Palestine Solidarity Campaign, invite you to a special free screening of the highly acclaimed Palestinian documentary film ‘Naila and the Uprising’. The film will be shown in West Wing 9, Main Quad, University College Cork at 6pm. The film will be followed by a discussion and Q&A with the film’s producer Rula Salameh.

BOOKING IS REQUIRED as spaces are limited – please email Rola Abu-Zeid-O’Neill for details – r.azoneill [at] ucc.ie