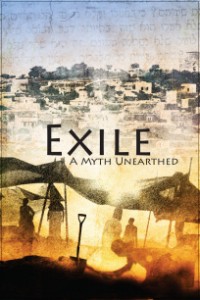 What:  Showing of documentary Exile: A Myth Unearthed that the BBC diluted and then, last week, cancelled at the last minute.

When The Guardian previewed a TV documentary that was scheduled for broadcast at 9:00 PM on BBC 4 last Thursday (25 April 2013), it noted that the programme “will likely ruffle some feathers”.

The people whose feathers might have been ruffled must have exerted extraordinary pressure, because, at the last moment, the BBC cancelled the broadcast.

Ilan Ziv, the Israeli who made the documentary, published, two days after the cancellation, an account of the extraordinary pusillanimity of the BBC. You can read his account here:

As Ziv explains, prior to cancelling the broadcast, the BBC had already revealed its cowardice by both cutting the documentary and altering its title. He writes that the episode is a:

“saga of well meaning programming executives who
acquired  the ‘courageous’ film  they claim to love,
believing that they can sneak it by with a
‘neutral title’. When they were ‘caught’, rather
than face the criticism  and be helped by the mountains
of documents and dates I was ready to send them,  they
panicked like deer in the headlights not knowing what to
do and eventually raised  their hands in resignation.”

The original documentary, uncut and with its proper title, will be shown in UCC this week.