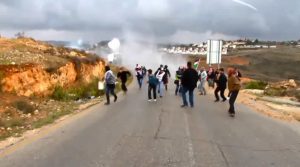 “They’re trying to tell us something but we don’t even pay attention.”

Thank God it’s Friday is an award-winning documentary about daily life in the Palestinian village Nabi Saleh (where Ahed Tamimi and her family live) and in the nearby illegal Israeli settlement of Halamish.

Every Friday for three years the people from Nabi Saleh hold a protest march, which is met by tear gas and rubber bullets from Israeli occupation forces. During a protest on one Friday, Mustafa Tamimi, a young man fromNabi Saleh, gets shot dead.