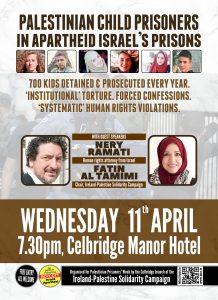 They are then taken to the military court for a remand hearing. In the vast majority of cases, the military judges approve remand, even when the only evidence against the minors is their own confession. These military courts, which are only used to try Palestinians, have a 99.7% conviction rate and have been repeatedly criticised by human rights groups as failing to meet international standards for a fair trial. The facts and figures all demonstrate that the righst of Palestinian minors’ are being regularly and systematically violated by Apartheid Israel.

Fatin Al Tamimi is chairperson of the Ireland-Palestine Solidarity Campaign. A diaspora Palestinian with Jordanian-Irish citizenship, Ms. Tamimi has been living and raising her family in Ireland for 30 years. Her family originally hails from Gaza and Hebron in Palestine, and she still has close relatives living in both areas. She has been involved for many years in Palestine solidarity work in Ireland, and in 2016 she was elected to the position of Chairperson of the IPSC, the first Palestinian to hold the position. She is also active in anti-racist, anti-war and women’s groups in Ireland, and has spoken at many events.

Organised by the Ireland-Palestine Solidarity Campaign in Celbridge