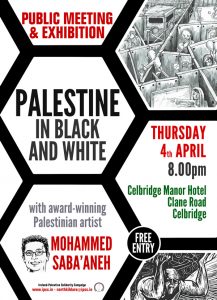 On Thursday 4th April you are invited to attend an unmissable talk by, and exhibition of the work of, Palestinian political cartoonist Mohammad Saba’aneh. The event will take place at 8pm in the Manor Hotel, Clane Road, Celbridge.

Hosted by the North Kildare Branch of the IPSC