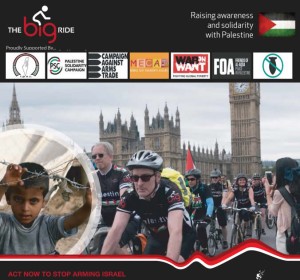 Raising awareness and solidarity with Palestine.

The Big Ride is an initiative by supporters of the Palestinian people which combines a love of cycling with practical solidarity and awareness raising, especially around the plight of children in Gaza.

In 2015 we were motivated to organise a marathon 450 mile, nine day cycle ride from Edinburgh to London, involving more than 200 participants and supporters which raised £65,898 for the Middle Eastern Children’s Alliance.

Along the length of the route we were greeted by a wave of support and many, many people who wanted to learn more. We highlighted the consequences of the 51-day Israeli bombardment of Gaza in 2014, which killed 547 children under the age 12 and caused trauma to another 400,000 according to the United Nations.

NEW WAVE OF SOLIDARITY IN 2016

In 2016 we are again setting out on the road for Palestine solidarity. This year we want to focus on the UK arms trade with Israel. There are now no restrictions on arms exports from the UK to Israel. This growing market is seen as business as usual, just another opportunity to make money out of human suffering.

We will organise a series of regional bike rides starting on Saturday 6th August 2016 from.

All roads will lead to Birmingham where Palestine supporters will stage a major public event, with music and other entertainment, food, stalls and speakers from the growing solidarity movement.

The ride will end on Monday with a mass cycle ride of about 18 miles to the final destination in Shenstone, Staffordshire. We’ll be riding to an arms factory called UAV Engines, which is owned by Israeli arms company Elbit Systems. Elbit Systems are Israel’s biggest private arms company, and their factory in Shenstone makes parts for drones which are then exported all over the world. The factory has already been the target of mass protests, and we’ll be holding a rally outside and joining the call to Stop Arming Israel.”

WHAT YOU CAN DO

Let us know if you want to get involved in organising or participating in The Big Ride for Palestine.