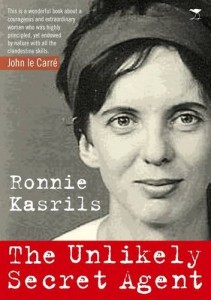 Note: Ronnie Kasrils is a good friend of the Ireland Palestine Solidarity Campaign and, like his late wife, has been a consistently articulate voice for Palestinian freedom from Israeli Apartheid. While this book is not directly related to the Palestinian issue, we would encourage our supporters to attend in support of Ronnie and to remember the victorious struggle against South African Apartheid which inspires BDS activist in the Palestinian movement.

“The Unlikely Secret Agent” by South African struggle veteran Ronnie Kasrils. The book is a real-life romance and thriller about his late wife and their daring exploits at the commencement of the armed struggle in 1961-63. It deals with her arrest, brutal interrogation and amazing escape from police custody. The book has been shortlisted for South Africa’s most prestigious literary prize. The author, a life long freedom fighter was minister in South Africa’s government 1994-2008, will discuss the book.

The Unlikely Secret AgentIt is 1963. South Africa is in crisis and the white state is under siege. On 19 August the dreaded Security Police swoop on Griggs bookstore in downtown Durban and arrest Eleanor, the daughter of the manageress. They threaten to “break her or hang her” if she does not lead them to her lover, “Red” Ronnie Kasrils, who is wanted on suspicion of involvement in recent acts of sabotage, including the toppling of electricity pylons and explosions at a Security Police office in Durban.

Though she comes under intense pressure during interrogation, Eleanor has her own secret to conceal. She has been acting as a clandestine agent for the underground ANC and must protect her handlers and Ronnie at all costs. Astutely, she convinces the police that she is on the verge of a nervous breakdown and, still a prisoner, is sent off to a mental hospital in Pietermaritzburg for assessment. It is here that she plots her escape …

The Unlikely Secret Agent is the remarkable story of a young woman’s courage and daring at a time of increasing repression in apartheid South Africa is told here for the first time with great verve and élan by Eleanor’s husband, Ronnie Kasrils, who eventually became South Africa’s Minister of Intelligence Services in 2004. He is the author of a bestselling autobiography, Armed and Dangerous.

Ronnie Kasrils started off as a script writer for a Johannesburg film studio and then for Lever Brothers, as Television and Film Director for their advertising division in Durban, until 1962. In 1960 he was prompted by the Sharpville Massacre to join the ANC, where he served as the secretary of the ANC-aligned Congress of Democrats in Natal until it was banned in 1962. In 1963, Kasrils became Commander of the Natal Regional Command of MK. Exiled for 27 years; he was based in London, Luanda, Maputo, Swaziland, Botswana and Lusaka.