[Belfast] Workshop: Countering the normalisation of the Israeli occupation in the eyes of the world (Kairos Ireland) 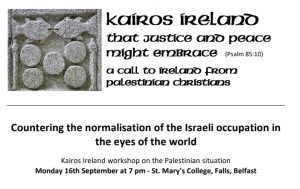 The geo-politics of the Middle East has changed substantially in the past 10 years and the region is in greater turmoil with unresolved wars in Syria and the Yemen. The spotlight has gone off the Israeli occupation of the West Bank and the blockade of the Gaza Strip. The much-hoped peace process collapsed some time ago leaving the Palestinian people in despair. While the United States has pulled back its military troop presence, it has delivered more than $134 billion in this decade to Israel in military and economic aid, despite Israel’s small population and high standard of living. Yet under the Trump Presidency it has cut aid to UNWRA and the Palestinian Authority. The Arab world is split through opposing Saudi Arabian and Iranian alliances although the Arab League position of 2002 seems to remain in place. This called for the full withdrawal by Israel “to the 1967 borders” in return for fully normalized relations.

Ireland continues to live in hope of a two-state solution but every day sees continued Jewish Israeli encroachment on Palestinian land that destroys olive trees and diminishes the viability of a contiguous Palestinian state. Does that mean we are looking at a one-state reality? What would that look like and would it be a disaster for Palestinians? Has Ireland at official level backed off its traditional support for Palestine because of external economic pressures? With all the world issues facing us today, what is it about the Palestinian situation that connects us in Ireland to support the non-violent efforts of Palestinians?

1. Rifat Odeh Kassis will give a Palestinian perspective through the lens of the Kairos movement

2. Mark Braverman will provide an American perspective on the U.S. as an “honest broker,” the problem with the two-state solution, and the role of Christian-Jewish relations.

3. Rev Brian Brown from his South African perspective will attempt to answer the question: Do the policies of Israel in regard to the Occupied Palestinian Territories replicate those of Apartheid South Africa?

4. Opportunities for discussion and understanding the issues involved.