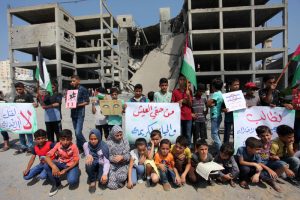 OUR ON-GOING SOLIDARITY WITH THE GREAT MARCH OF RETURN

The Palestinian people of Gaza continue to demand their rights, an end to the inhuman siege, and the right of return to their land and their homes. Their courageous Great March of Return also calls on the citizens of the world to take action in solidarity.

The response of the Israeli armed forces has been one of slaughter.

More than 160 Palestinians have been killed and over 7,000 wounded including journalists, medics and children since 30 March of this year.

Show your solidarity with the Palestinian people by attending the rally outside Belfast City Hall.

We will also recall the thousands of Palestinian and Lebanese civilians who were slaughtered, during the Sabra and Shatila massacre, between the 16-18th September 1982.