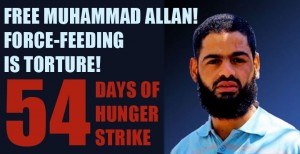 Hunger striking Palestinian political prisoner Muhammad Allan, a lawyer who has been detained without charge by the apartheid state of Israel, recently slipped into a coma. The Israeli state has threatened to force feed Palestinian Hunger strikers, a type of torture.

The Belfast Palestine Solidarity Campaign IPSC is calling a white line protest in solidarity with Muhammad and all Palestinian people suffering under the Israel’s apartheid regime.

Join us at 1 pm on Saturday the 22nd August where the Andersonstown barracks used to be facing McEnaney’s Pub, at the intersection of Falls Road & Glen Road, in West Belfast.

Organised by the Belfast branch of the Ireland-Palestine Solidarity Campaign.