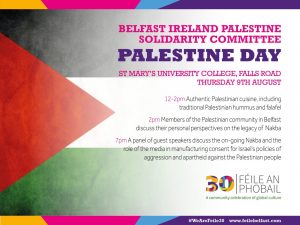 In the 70th year of the Palestinian Nakba [Arabic for ‘catastrophe’], this year’s event will focus on the on-going Nakba and Israel’s racist policies of aggression and apartheid against the Palestinian people. Come along to St. Mary’s University College, Falls Road, Belfast on Thursday 9th August for the annual Palestine Day as part of Féile An Phobail 2018.

“Red Noses Palestine Exhibition,” an exhibition of Belfast photographer McKernan’s work documenting the extraordinary work of Red Nose Palestine, an organisation established in 2010 to “bring fun and laughter to children in need of joy throughout Palestine.”

2.00pm – Members of the Palestinian community in Belfast discuss their personal perspectives on the legacy of Nakba and the continued denial of the Right of Return as enshrined in United Nations General Assembly Resolution 194.

7.00pm – A panel of guest speakers, discuss the on-going Nakba in the context of the role mainstream media have played in manufacturing consent for Israel’s racist policies of aggression and apartheid against the Palestinian people.