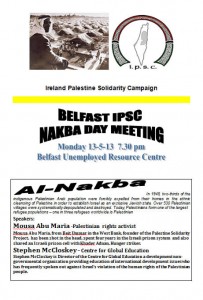 In 1948, two-thirds of the indigenous Palestinian Arab population were forcibly expelled from their homes in the ethnic cleansing of Palestine in order to establish Israel as an exclusive Jewish state. Over 530 Palestinian villages were systematically depopulated and destroyed. Today, Palestinians form one of the largest refugee populations – one in three refugees worldwide is Palestinian