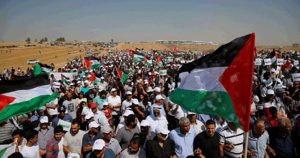 On Saturday the 30th of March, between 3pm and 4pm, please join us at Belfast City Hall to respond to the call from Gaza to mark the first anniversary of the heroic Great March of Return. The date also marks the 43rd Anniversary of Palestinian Land Day.

From the 30th of March 2018, every Friday for a whole year, Palestinian refugee protesters have been marching to the fence in Gaza that separates them from the home their families where driven from in 1948. These protesters have suffered so much so that their struggle for FREEDOM, JUSTICE, EQUALITY and RETURN will be heard the world over. Over 260 of these brave people have lost their lives for this struggle, while thousands more have been injured as Israeli occupation forces fired indiscriminately into crowds of unarmed demonstrators.

These protests are inspired by events on March 30th 1976 when Israeli forces murdered 6 unarmed demonstrators and injured hundreds more in protests against Land theft. An anniversary marked ever since.

We ask you to join us for one hour to honour these historic demonstrations for justice and pay our respects to those who have lost their lives seeking return.

Hosted by the Belfast Branch of the Ireland-Palestine Solidarity Campaign and Trade Union Friends of Palestine.