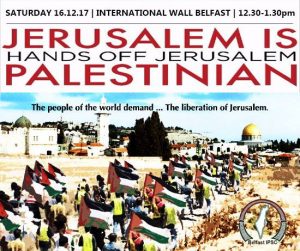 The Belfast branch of the Ireland-Palestine Solidarity Campaign will hold a demonstration at the International Wall on Saturday 16th December between 12.30 & 1.30pm in protest at Donald Trump’s decision to recognise Jerusalem as Israel’s capital and to situate the United States embassy in Israel there.

We call on all local solidarity activists, people of conscience, political activists, Trade Unionists and members of the public to attend and show solidarity with the Palestinian people whose own protests have been met with a brutal backlash from the apartheid state, with 100’s injured and a number murdered to date. We would encourage people to bring and display any Palestinian flags they may have.

This protest shall give the people of Belfast an opportunity to demonstrate their solidarity with the Palestinian people, particularly those in Jerusalem. It will allow Belfast citizens to register their firm opposition to this reckless and immoral act by Donald Trump, as well as the broader colonialist and imperialist actions of the Israeli state, which continues to flout international law in its crimes against the Palestinian people.