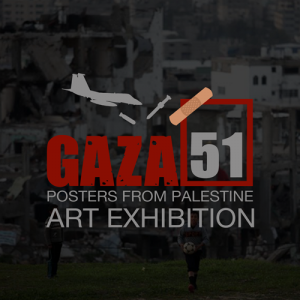 “Some of the posters to be presented were designed during the last attack on Gaza in summer 2014, when I was forced to work under very difficult conditions, listening to the news on the local radio stations and at the same time listening to the sounds of warplanes and artillery, which did not stop for a single moment. I worked with my laptop, but during power outages, which continued for long hours during each day, I was left without internet connection isolating me from the outside world and creating many obstacles while designing these posters.
Just like any other Palestinian I have been suffering from the occupation and the wars inflicted upon Gaza. During 6 years only I have lived through 3 Israeli wars on Gaza.I love art work and design because I believe that art is the source of our strength, it helps us to overcome all crises and it keeps us steadfast against all the hardships we are facing.”

Part of the 3rd Belfast Palestine Arts Festival which opens on 19th March and runs to the 29th March. The festival features a diverse range of compelling and thought-provoking films and exhibitions.