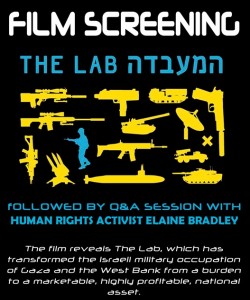 Trade Union Friends of Palestine, Unison and Belfast and B&DTUC jointly host the screening of The Lab’, a powerful and unsettling film by Israeli film director and investigative journalist Yotam Feldman. The screening will be followed by a discussion with Irish human rights activist Elaine Bradley, recently returned from 8 months in the West Bank and Gaza.

The Lab is an investigative documentary revealing how the Israeli military occupation in Palestine has become a business and a marketable, highly profitable, national asset rather than a burden.

We know that since 9/11 the Israeli arms industries are doing bigger business than ever before. But why is it that there is a spike in Israeli arms sales after every murderous onslaught on Gaza when thousands of innocent Palestinian civilians are killed? Large Israeli companies develop and test the vessels of future warfare, creating a science out of targeted killings, which is then sold worldwide by private Israeli agents who can refer to the devastation of Gaza to demonstrate their effectiveness. They manipulate a network of Israeli politicians and army commanders, while Israeli theoreticians explain to various foreign countries how to defeat civil and para-military resistance.

Sign the petition calling for an End to the Irish Arms Trade With Israel here – and take more action to support the campaign here.

Organised by Trade Union Friends of Palestine, Unison and Belfast and B&DTUC as part of the 2015 Belfast May Day Festival.