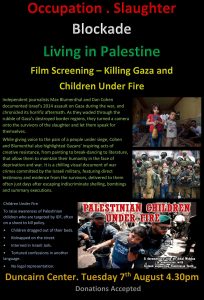 Killing Gaza, a film by Independent journalists Max Blumenthal and Dan Cohen documented Israel’s 2014 assault on Gaza during the war, and chronicled its horrific aftermath. As they waded through the rubble of Gaza’s destroyed border regions, they turned a camera onto the survivors of the slaughter and let them speak for themselves.

Children Under Fire was created to raise awareness of Palestinian children who are targeted by IDF, often on a shoot to kill policy. Children dragged out of their beds. Kidnapped on the street. Interned in Israeli Jails. Tortured confessions in another language. No legal representation.