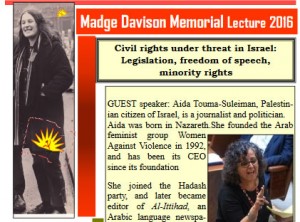 Aida was born in Nazareth and founded the Arab feminist group Women Against Violence in 1992, and has been its CEO since its foundation. She joined the Hadash party, and later became editor of Al-Ittihad, an Arabic language newspaper affiliated with the Israeli Communist Party. She also became the first female member of the High Follow-Up Committee for Arab Citizens of Israel. She cofounded the International Women’s Commission for a Just Palestinian-Israeli Peace. She has been a member of the Israeli Knesset since 2015 and the chair of the Parliamentary Committee on the status of women and gender equality.