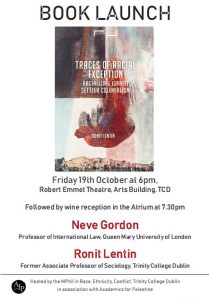 The launch will be followed by a wine reception.

Positioning race front and centre, this book theorizes that political violence, in the form of a socio-political process that differentiates between human and less-than-human populations, is used by the state of Israel in racializing and ruling the citizens of occupied Palestine.

Lentin argues that Israel’s rule over Palestine is an example of Agamben’s state of exception, Goldberg’s racial state and Wolfe’s settler colony; the Israeli racial settler colony employs its laws to rule besieged Palestine, while excluding itself and its Jewish citizen-colonists from legal instruments and governmental technologies. Governing through emergency legislation and through practices of exception, emergency, necessity and security, Israel positions itself outside domestic and international law.

Employing existing media, activist, and academic accounts of racialization this book deliberately breaks from white, Western theorizations of biopolitics, exception, and bare life, and instead foregrounds race and gender in analysing settler colonial conditions in Israel.

Ronit Lentin is former associate professor of sociology, Trinity College Dublin, Ireland and founder of the MPhil in Race, Ethnicity and Conflict. She has published extensively on Palestine-Israel, racism and immigration in Ireland. Her recent books include: Thinking Palestine (2008), Post-Memory and Melancholia: Israelis Memorialising the Palestinian Nakba (2010) and Migrant Activism and Integration from Below in Ireland (2012).

Neve Gordon is Professor in the Department of Politics and International Studies, SOAS London. His research focuses on international law, human rights, the ethics of violence, the Israeli-Palestinian conflict and political theory. His most recent book, The Human Right to Dominate (written with Nicola Perugini) was published in 2015 by Oxford University Press.He is currently working on a new book project dealing with the history and politics of human shields.

The book launch is organised by Academics for Palestine in association with the TCD MPhil In Race, Ethnicity and Conflict.