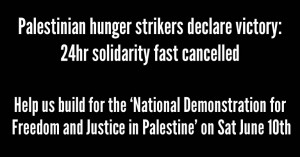 On Saturday 27th May, after 41 days of a mass hunger strike involving some 1,500 Palestinian political prisoners, the leaders of the strike declared victory and suspended the strike. 80% of the hunger strikers’ demands for basic rights have been met. We salute the steadfastness of the strikers in their quest for justice – and sincerely thank all those who took part in solidarity actions over the past month.

The IPSC had planned a 24 hour solidarity fast for Wednesday 31st May in order to try to highlight the strike which had been largely ignored by the mainstream media in Ireland. As a result of the suspension of the strike, we are of course cancelling the solidarity fast. We would like to thank the many people who pledged to take part – and would ask them to direct their energy and support towards helping us build for the ‘National Demonstration for Freedom and Justice in Palestine’ on Saturday June 10th.


1) Join and share the event on Facebook here.
2) Tweet about it here.
3) Download posters and leaflets here to print out and stick in workplaces, community centres, libraries, cafes, pubs etc (or contact us to get hard-copies)
4) Ask a friend (or several) to attend along with you.

On Wednesday 31st May, the Ireland-Palestine Solidarity Campaign (IPSC) is asking people to join in a 24-hour nationwide ‘#FastForFreedom’ solidarity fast to raise awareness of the ongoing Freedom & Dignity Hunger Strike by over 1,500 Palestinian political prisoners in Israeli jails. At the time of writing, the prisoners are on the 37th day of their strike – not that you would know this from Irish mainstream media.

If you are willing to take part, please let us know by signing the pledge below – then let your friends know by sharing it on Facebook and Twitter, thanks!

For more information see our Frequently Asked Questions on the hunger strike here.