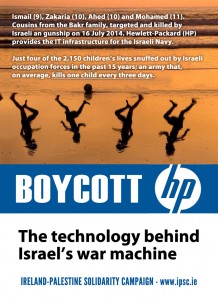 As part of Israeli Apartheid Week 2017, the Ireland-Palestine Solidarity Campaign (IPSC) asks you to join us for an information street stall to help inform members of the public about Hewlett Packard’s (HP) role in helping the Apartheid state of Israel violation international law and abuse Palestinian human rights. We will be hosting a stall from 12:30pm to 4pm on the Saturday 4th March at the junction of Henry Street, Mary Street and Liffey Street in Dublin 1’s shopping district.

HP’s technology and equipment facilitate Israel’s brutal decades-long military occupation of Palestine and the assocaited apartheid regime, war crimes and ongoing colonisation. It does this in a variety of ways, especially through the development of Israel’s biometric system used for population and territorial control and surveillance of Palestinians both inside Israel and in the occupied Palestinian territory.

The Checkpoint Regime: HP maintaines the BASEL movement control system which is installed at Israeli military checkpoints in the occupied West Bank which deprive Palestinians of freedom of movement in violation of international law. Article 13 of the Universal Declaration of Human Rights states that: “Everyone has the right to freedom of movement… within the borders of each state.”

Israeli Military: HP provides the IT infrastructure for the Israeli Navy, thereby helping to enforce the illegal blockade of Gaza, and supplies the computer systems for the Ministry of Defense.

Colonial Settlements: HP is a technological business partner of two companies located in thesettlement of Modi’in Illit and provides services to two of the largest settlements in the occupied West Bank. All Israeli settlements in Palestine are illegal under international law – a “flagrant violation” in the words of UN Security Council Resolution 2334 – and are designated war crimes under the Geneva Conventions.