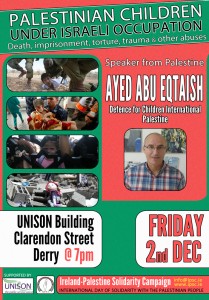 To commemorate the annual International Day of Solidarity With the Palestinian People 2016, the Ireland-Palestine Solidarity Campaign (IPSC) is honoured to host Ayed Abu Eqtaish from Defence For Children International in Palestine.  Mr. Abu Eqtaish will speak on Friday 2nd December in the UNISON House, Clarendon Street, Derry at 7pm.

Defense for Children International Palestine (DCIP) is committed to securing a just and viable future for Palestinian children in the Occupied Palestinian Territory. For more than twenty years, DCIP has supported and advocated for this child population: investigating and documenting grave human rights violations, holding both Israeli and Palestinian authorities to account, and providing legal services to children in urgent need. DCIP’s is the only Palestinian human rights organization specifically focused on child rights.

Hosted by the Derry branch of the Ireland-Palestine Solidarity Campaign, and supported by UNISON The Public Service Union to commemorate the annual International Day of Solidarity With the Palestinian People 2016.