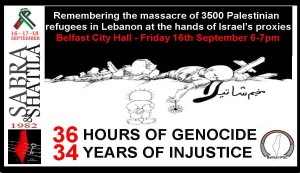 The Belfast branch of the Ireland-Palestine Solidarity Campaign will be holding a vigil outside Belfast City Hall from 6.00 – 7.00pm on Friday 16 September in memory of the victims of the Sabra and Shatila massacres 34 years ago.

The vigil will also call for international protection for Palestinian civilians, who are still falling victim to Israel’s war machine.

The vigil will finish at 7pm to link-up with the “Tesco, stop trading with Israel/Sabra & Shatila massacre Vigil” a short distance away on Royal Avenue organised by Immediate Expulsion of all Ilsraeli Diplomats from Ireland.

34 years ago Israeli forces took over West Beirut after a long siege. Once in control, they allowed their local militia allies to enter the Palestinian refugee camps at Sabra and Shatila, where from Thursday 16 September to Sunday 19 September they massacred up to 3,500 the residents. The Palestinians were defenceless: PLO armed forces had been evacuated from Beirut in August under an American-brokered agreement.

Israeli troops maintained position outside the camps and did not intervene.

Ariel Sharon, who was then Israeli Defence Minister and controlled operations in Lebanon, was found to bear personal responsibility for the massacre by an official inquiry and was forced to resign. He would in later years become Prime Minister of Israel.

Join us outside Belfast City Hall on Friday 16th to commemorate the victims of Sabra and Shatila and call for international protection for the people of Palestine.