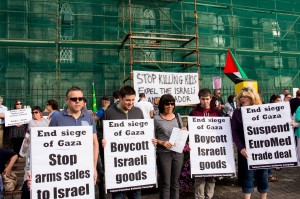 Join us outside the Town Hall in Newbridge on at 6pm on Saturday 11th July as we mark the 1 year anniversary of “Operation Protective Edge”, Israel’s slaughter of Palestinian civilians in 2014.

After the demo we will be going to the Riverbank to watch the Palestinian documentary 5 Broken Cameras which is being shown as part of Palfest. Film starts at 8pm.

‘One year ago, Israel launched a brutal military attack on the Palestinian population of the occupied and besieged Gaza Strip. More than 2,200 Palestinians were killed, including 551 children, and more than 10,000 people were seriously injured and hundreds of thousands were made homeless, forcibly displaced and trapped inside Gaza. Deliberate attacks on Palestinian civilians of this kind are part and parcel of an Israeli policy that aims to force Palestinians into submission and to thwart the Palestinian people’s exercise of its right to self-determination.’ – Palestinian BDS National Committee