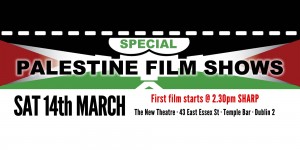 This is a special one day film festival in The New Theatre (Connolly Books), 43 East Essex Street, Temple Bar, Dublin 2 on Saturday 14th March from 2.30pm SHARP. Proudly hosted by the Progressive Film Club and Ireland-Palestine Solidarity Campaign as part of Israeli Apartheid Week 2015. Both films are FREE ENTRY! Telling the story of the systematic looting in 1948 of 30,000 Palestinian books in a joint operation by the nascent Israeli army and the Israeli national library. A remarkable illustration of how one culture emerges from the dust of another after it has laid it to waste; the moment Palestinian culture is destroyed is also the moment a new Israeli consciousness is born, based not only on the erasure of the Arabs’ presence in Palestine but also on the destruction of their culture.

■ Directed by Benny Brunner.
■ In English & Hebrew, with English subtitles. An intimate, humorous, portrait of three generations of exile in the Palestinian refugee camp of Ain el-Helweh, in Lebanon. Personal recordings, family archives, and historical footage ensure the film is a sensitive and illuminating study of belonging, friendship, and family. Filmed over more than 20 years by multiple generations of one family, is more than just a family portrait; it is an attempt to record what is being forgotten, and mark what should not be erased from collective memory.

■ Directed by Mahdi Fleifel.
■ In Arabic, with English subtitles.

A note of thanks to the directors

We would like to thank the directors and distributors of these films for donating the screening rights free of charge. Support them by purchasing the DVDs from:
http://www.thegreatbookrobbery.org/
http://www.e2films.co.uk/aworldnotours