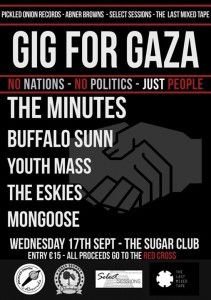 The Last Mixed Tape is proud to be collaborating with Abner Brown’s Barbershop, Pickled Onion Records and the Select Sessions to present Gig For Gaza, a humanitarian night aimed at raising funds for the Irish Red Cross: Gaza Crisis Appeal.

Taking place on Wednesday, September 17th at the Sugar Club in Dublin the show will look to support the Irish Red Cross and their work helping those effected by the conflict in Gaza. All proceeds on the night going towards the charity.

Tickets to Gig For Gaza with The Minutes, Buffalo Sunn, Mongoose, the Eskies and Youth Mass in the Sugar Club on September 17th are priced at €15 on the night or via thesugarclub.com.