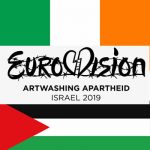 In an open letter published in The Guardian this evening, they write: “Until Palestinians can enjoy freedom, justice and equal rights to all humans, there should be no business-as-usual with the state that is denying them their basic rights.”

Israel is expected to host the Eurovision Song Contest in May 2019, following Netta Barzilai’s win at the 2018 competition, leading to widespread calls for a boycott of the competition, including by more than 60 Irish celebrities and public figures, and a petition signed by over 10,000 Irish people.

Eurovision 1994 winner for Ireland, Charlie McGettigan, Finnish Eurovision finalists Kaija Kärkinen (1991) and Kyösti Laihi (1988), Italian actor, singer and playwright Moni Ovadia, and Portuguese national theatre artistic director Tiago Rodrigues are also signatories to the letter, which states: “Eurovision 2019 should be boycotted if it is hosted by Israel while it continues its grave, decades-old violations of Palestinian human rights.”

In June, Palestinian cultural organisations called for the boycott of Eurovision 2019, highlighting that: “Israel’s regime of military occupation, settler-colonialism and apartheid is shamelessly using Eurovision as part of its official Brand Israel strategy, which tries to show ‘Israel’s prettier face’ to whitewash and distract attention from its war crimes against Palestinians.”

Olof Dreijer and Karin Dreijer, formerly of Sweden duo The Knife, also added their names to the appeal, which says: “On May 14, days after Israel’s Eurovision win, the Israeli army killed 62 unarmed Palestinian protesters in Gaza, including six children, and injured hundreds, most with live ammunition. Amnesty International has condemned Israel’s shoot-to-kill-or-maim policy and Human Rights Watch described the killings as “unlawful and calculated.””

“We understand that the European Broadcasting Union is demanding that Israel finds a ‘non-divisive’ location for the 2019 Eurovision. It should cancel Israel’s hosting of the contest altogether and move it to another country with a better human rights record. Injustice divides, while the pursuit of dignity and human rights unites.”

The Palestinian Campaign for the Academic and Cultural Boycott of Israel (PACBI), a founding member of the Palestinian Boycott, Divestment and Sanctions (BDS) national committee, said on the publication of the letter:

“Eurovision organizers have demanded that Israel respect freedom of expression and movement as a condition of hosting the contest. Senior Israeli ministers have outright rejected this, insisting on enforcing Israel’s repressive, anti-democratic legislation. Eurovision organizers should heed the calls of Eurovision finalists (including one winner), presenters, commentators and judges, as well as the wider community of artists, and move the contest from Israel altogether.”