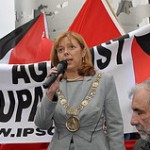 The Chairperson of the European Parliament’s Delegation to the Palestinian Legislative Council (DPLC), Irish MEP Emer Costello (Labour, S&D), has said that she is both astounded and dismayed at the decision of the Israeli authorities to refuse an official visit of the Delegation to Gaza. The visit, which was scheduled to take place between 27th and 30th October 2013, had the full support of Martin Schulz, President of the European Parliament.

“Despite interventions by the President Schulz and other distinguished parliamentarians, the Israeli authorities are preventing elected members of an official delegation from paying a humanitarian visit to this ravaged and impoverished region. The official reason for refusal of access was cited as being in line with the policy according to which Israel does not facilitate visits to the Gaza Strip which will strengthen Hamas. This decision is deplorable and without foundation,” Costello said

The Chairperson of the DPLC stated also that “the visit was due to take place under the auspices of UNRWA, and clearly focused on vital public services such as schools, health centres and food distribution centres. Furthermore, we had arranged to visit EU-funded job programmes and hold meetings on education with students from the Christian community. Given the worrying current developments in the region, the programme had a purely social, economic and humanitarian focus.”

“Today at the European Parliament, we voted on the budget line ‘financial assistance to Palestine, the peace process and UNRWA’, granting €300 million in funding to the region for 2014. This makes the decision to refuse access to elected Members of the European Parliament even more disgraceful and nonsensical,” she added

“I have requested that President Schulz and High Representative Catherine Ashton take up the issue with the Israeli authorities and that we continue with the mission. In the event that we are refused access to Gaza, it is envisaged that we meet with UNRWA in the West Bank,” Costello wrote in her statement.

First published on the ECCP website, on Thursday 24th October.