Action Item: Question your candidates for the European Elections about EU-Israel relations 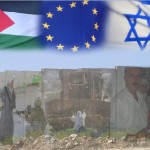 Hold your candidates to account during the European Elections, and help gather information which will help Palestine supporters decide how to vote.

Challenging local, regional, and national politicians on their position on EU relations with Israel is a very important ongoing activity. Particularly in the run-up to elections, engaging candidates and parties in EU-Israel relations related questions can have an impact.

Any time is good to ask your candidates about the EU- Israel relations but the run up to elections provides a particularly good opportunity as more attention is paid to the policies, intentions and promises of politicians and their parties.

The EU – a major player in resolving the Israeli-Palestinian conflict

While 2013 was marked by the revival of the Israeli-Palestinian peace process under the aegis of the United States, the situation in Israel / Palestine has continued to deteriorate.

Between March and November 2013, the Israeli government has announced the construction of 8,943 new housing units in Israeli illegal settlements. The same year more than 399 settler attacks were directed at Palestinians. The living conditions of the population in the Gaza Strip deteriorated significantly. Human rights are also endangered in Israel: the Prawer Plan announced by the Israeli government (currently suspended) will displace 30.000 – 40.000 Bedouin living in the Negev desert if implemented

The EU should now go further in its commitment to respect human rights in Israel and Palestine and exclude Israeli illegal settlements from its cooperation with Israel.

The Netherlands and Britain have already introduced their advice against doing business with illegal Israeli settlements. The EU should go further and must strengthen regulatory systems including controls and effective sanctions. The EU could also adopt restrictive measures to prohibit the import of products from the settlements.

2. The destruction of infrastructure funded by the EU

Infrastructure financed by the European Union and its members in the Occupied Palestinian Territories is being regularly destroyed by the Israeli forces. These destructions are being listed, evaluated and systematically denounced by the EU.

In her response to a written parliamentary question – EU foreign policy chief Catherine Ashton stated that the total cost of the destruction of EU financed projects in the period 2001-2009 amounts to 49,14 million euro.

Israeli authorities continue to impose an illegal blockade on Gaza which affects every aspect of life in the Gaza Strip. The continuing siege of the Gaza Strip, together with still longer-lasting and nearly complete blockade, have ruined the Palestinian economy in Gaza, pushing a majority of the population below the poverty threshold and destroying the hopes of young people.

Since 1967 Israel has demolished more than 28,000 Palestinian homes, businesses, livestock facilities and other structures vital to Palestinian life and livelihood in the Occupied Palestinian Territory (OPT). House demolitions and forced evictions are among Israel’s most heinous practices in the OPT – though they continue to be enacted on a broad scale within Israel as well. In 2013 Israel demolished 663 Palestinian structures displacing more than 1100 Palestinians. The EU frequently criticises Israel’s ongoing demolition of Palestinian homes and its continued settlements building as reflected in the ENP Progress Report published by the European Commission.

In all the areas mentioned above MEPs have a role to play: they can develop EU policy vis-à- vis Israel to ensure respect for international law by challenging the EU and its member states policy

MEPs must confirm and strengthen their commitment to the just solution of the Israeli- Palestinian conflict.

The European Coordination of Committees and Associations for Palestine (ECCP) calls on all EU candidates to take a critical position on the Euro-Israeli relations, the destruction of infrastructure funded by the EU and the continued blockade of Gaza.

1. Will you support measures to exclude Israeli illegal settlements from the EU relations with Israel?

2. Will you support a campaign to exclude goods entering the EU from Israel’s settlements beyond the Green Line?

3. Will you ensure that the EU fully applies the conditionality clause guaranteeing respect for human rights in all its future and current agreements between the EU and Israel?

4. Will you oppose Israel’s violations of international human rights and humanitarian law, and will you support Palestinians’ right to self-determination?