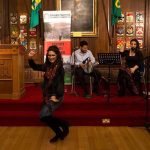 On the evening of the 29th November 2017, to mark the UN’s International Day of Solidarity with the Palestinian People, the Lord Mayor of Dublin and the Ireland-Palestine Solidarity Campaign (IPSC) hosted an evening of Palestinian culture in the Oak Room of the Mansion House, the Mayor’s official residence.

Scores of IPSC campaigners, activists from other solidarity and human rights groups, and City Councillors, Senators and TDs gathered to experience a showcase of Palestinian culture in the form of music, song, poetry, and of course, food. Although unable to make it, President Michael D. Higgins sent good wishes to all present. In his opening speech, the Lord Mayor Micheál Mac Donncha praised the work of the IPSC and other groups working for justice for Palestinians, and reaffirmed his support for the Boycott, Divestment and Sanctions (BDS) campaign that aims to compel Israel to obey international law and allow Palestinians to exercise their fundamental rights, stating that BDS is “a just and necessary response to Israeli apartheid is for internationals to boycott the oppressor state”.

The Lord Mayor also spoke of the “affinity between people in Ireland and the people of Palestine”, which is as a result of “our historical experience as an oppressed people, isolated from the world by an Empire which denied our right to self-determination for so long,” and noted that “while no two people’s stories are exactly the same, we share many historic experiences and we share a commitment to human rights, justice and international law.” Fatin Al Tamimi, Chairperson of the Ireland-Palestine Solidarity Campaign, then spoke of the importance of culture as a means of resistance for Palestinians who are fighting Israel’s injustice and apartheid.

Ms. Tamimi drew parallels between the preservation of Irish indigenous culture by the Gaelic revivalists of the last century who turned it into a weapon against British colonialism, and the preservers of Palestinian culture since 1948 for whom culture is a form a resistance against Zionist colonialism.

Fatin also spoke of the importance of the BDS movement, in particular the Palestinian call for a cultural boycott of Israel, reminding artists that they “need to listen to the Palestinian people – not to their own egos. They need to respect the call from Palestinian civil society and not cross the cultural picket line. They should not patronise the oppressed with empty platitudes about peace and love.”

Fatin noted the powerful unifying effect culture has, saying that “as a people forcibly scattered throughout the world, our culture – words, songs, images, tastes, smells, clothes – defines and unites us, whether at home or in exile. It reminds us that one day we will return to our homeland to sing our songs, tell our stories, dance our dances, and eat our meals… together as a proud people in a free, just and equal country.”

Fatin finished by saying that “Palestinian culture serves a dual role; it both reflects on and contributes to our ongoing resistance. It speaks of our hopes and dreams, desires and longings, loves and losses, our tragic past, our present predicaments and our future freedom. Palestinian singer Reem Kelani once asked: “without culture, without narrative, without historic continuity, without music and poetry, what good is the land?”

“I agree. When it comes, our freedom will be the freedom to enjoy ourselves – to live and love, even to lament, in a free Palestine.” The final speaker was Palestinian-English oud player and activist Kareem Samara, who also spoke about the importance of both culture and the cultural boycott of Israel. Kareem spoke about his work as a co-founder of both Artists for Palestine and London Palestine Action.

There was poetry on the evening, with Fatin Al Tamimi and Abdallah Al Bayarri reading, in English and Arabic, poetry from Mahmoud Darwish and Tawfiq Zayyad.

To wrap up the evening everyone was treated to a fabulous 45 minutes of beautiful traditional and modern Palestinian folk music courtesy of the incredibly talented duo of Yara Salahiddeen on vocals and Kareem Samara on oud. There was even some impromptu dabke dancing, the traditional Palestinian folk dance.

As we come to the end of another year during which Palestinians have faced with incredible sumud (steadfastness) a worsening situation in the face of an international community that refuses to take action to stop Israel’s crimes, we in the IPSC would like to thank all our volunteers, members, donors, and our friends and colleagues in civil society and political organisations throughout Ireland.

Finally, we issue a special note of thanks to the Lord Mayor of Dublin for inviting to use Mansion House as his guest on two occasions this year. Dublin, and Ireland, stands with Palestine!