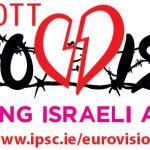 On Thursday 6th December, to coincide with the European Broadcasting Union (EBU)’s General Assembly, the Irish Campaign to Boycott the Eurovision in Apartheid Israel 2019 wrote to the Director General of RTÉ, Dee Forbes, Rory Coveney, Strategic Advisor to the Director General, and Michael Kealy, Head of RTÉ’s delegation for Eurovision, asking them to call on the EBU not to broadcast any Eurovision events into Israel’s illegal settlements in occupied Palestine.

The international campaign, acting in solidarity with Palestinian civil society, has widespread support with over 30,000 people signing a European-wide petition demanding the Eurovision not be held in Israel. In Ireland, almost 15,000 people have signed a separate petition calling on RTÉ and performers to boycott the event, and there is much support among the artistic community, including from former Eurovision winners and presenters.

The letter sent to RTÉ reads as follows:

We are writing to you on behalf of the Irish Campaign to Boycott the Eurovision in 2019 in Israel. We are asking that you raise with the EBU (European Broadcasting Union) a call from the PLO (Palestine Liberation Organisation)1 and the Palestinian Journalists’ Syndicate2 not to broadcast Eurovision Song Contest events in Israel’s illegal settlements, including those in occupied East Jerusalem, this is the least RTÉ should do to be in line with international law and European policy.

The Palestinian Journalists’ Syndicate has issued an appeal for solidarity from international colleagues stating:  “As those standing on the front lines reporting on Israel’s occupation, we bear the brunt of Israel’s daily violence against journalists. This violence against journalists and Palestinian civilians escalates whenever Israel hosts major international events. We have no doubt that this will be the case again when the EBU brings Eurovision to Israel. This cultural celebration will be a whitewash of Israel’s violent oppression.

“We therefore appeal to our peers and colleagues in Europe, and the EBU, to at the very least respect the international consensus on the illegality of Israel’s settlements and the duty of non-recognition. This means demanding that Kan does not broadcast Eurovision Song Contest events to Israel’s illegal settlements, which deny Palestinians basic human rights, including freedom of movement, and justify Israel’s oppression against Palestinian journalists.”

On November 30th PLO Executive Committee Member Dr. Hanan Ashrawi wrote: “The EBU has an obligation to ensure that it does not provide a platform for the legitimization and/or normalization of the illegal system of colonization in Palestine. The EBU must also understand that it is legally accountable to the act of profiteering from this illegal system of colonization, directly or indirectly.”

Further, on Tuesday 4th December at the launch of Kairos Ireland (An ecumenical response from Ireland to a call for solidarity by Palestinian Church leaders as they react to the challenge of military occupation by the state of Israel) in Dublin the Reverend John Parkin spoke of how Kairos Ireland support the cultural boycott of Israel and as part of that support the boycott of Eurovision 2019.  He hoped that those who work in RTE would be mindful of the just cause of the Palestinians, the call of Palestinian journalists, and that they would not be part of Eurovision 2019.

We therefore ask that you as representatives of RTÉ, mindful of the calls for solidarity from your Palestinian colleagues, and of minimal obligations under international law, call on the EBU not to broadcast any Eurovision 2019 events into Israel’s illegal settlements in occupied Palestinian territory.

We appreciate your having engaged with us on the Eurovision boycott campaign thus far and also your recognition that there are many Irish people who do not want it to go ahead in Israel. We hope that we can continue the dialogue with you on this issue. Many thanks.