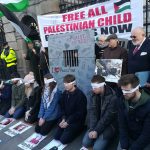 The Ireland-Palestine Solidarity Campaign, in association with Students for Justice in Palestine and United Against Racism organised a solidarity vigil to protest the imprisonment of Ahed Tamimi and all Palestinian child prisoners outside the gates of the Dail (Irish Parliament) at lunchtime on Thursday 25th January 2018. Speaking at the protest, IPSC Chairperson Fatin Al Tamimi said: “Ahed Tamimi is a 16-year-old Palestinian girl who has been detained and is awaiting trial for slapping an Israeli occupation soldier who invaded her village of Nabi Saleh. Ahed is just one of roughly 350 Palestinian children held in Israel’s apartheid prison system where torture and ill treatment during arrest and detention are routine, including horrendous abuses against children.”

She continued: “We are holding this symbolic protest outside the Irish parliament to highlight the issue of child prisoners and to appeal to the Irish government to take concrete action to end Israel’s brutal treatment of Palestinian children like Ahed Tamimi. Apartheid Israel must be held to account for its outrageous treatment of Palestinian children which violates the right of the child.” Following the protest a letter was handed in to the Irish Minister for Foreign Affairs imploring “the Irish Government to do all it possibly can to end these abuses of Palestinian children by Apartheid Israel. More than just condemnation, action is needed to bring pressure to bear of Israel to end these attacks on children, children who have known nothing but occupation and systemic violence their whole lives. Palestinians, not least Palestinian children, deserve freedom, justice and equality.” Each year Israel detains and prosecutes between 500 and 700 Palestinian children before apartheid military courts with a 99.74% conviction rate, and which Amnesty International states “do not meet international standards for fair trial”. Many more are temporarily detained, sometimes taken by soldiers raiding homes in the dead of night, and later released after severe interrogation periods without prosecution. According to Defence for Children International Palestine, some two-thirds of all children detained will face some sort of physical or mental abuses, including torture and sexual threats, during this process. UNICEF says that “Ill-treatment of Palestinian children in the Israeli military detention system appears to be widespread, systematic and institutionalised”.

16-year-old Ahed Tamimi, detained and facing trial on trumped up charges for slapping an Israeli occupation solider who invaded her village, is one of around 350 Palestinian children currently in Israel’s prison system, most held outside of Palestine in blatant violation of the Fourth Geneva Convention.

These experiences, not to mention the frequent killing and wounding of children by Israeli occupation forces, are traumatising entire generations; some argue that this is the point, that it is a conscious decision by Israeli authorities to treat Palestinian youth in this manner. Over 12,000 Palestinian children have gone through the Israeli prison system since 2000, while nearly 2,500 have been killed and countless thousands wounded. In Gaza alone, where children have borne the brunt of three vicious Israeli assaults over the past decade, UNRWA estimates that “more than 300,000 children are in need of psycho-social support”. The list of institutions and human rights organisations that have raised grave concerns over Israel’s treatment of Palestinian is large, and the number of reports issued are countless; UNICEF, Save the Children, Human Rights Watch, Amnesty International, Defence for Children International, Al Haq, B’Tselem, Public Committee Against Torture in Israel, Addameer, numerous delegations of lawyers and experts, and so on.

Below we share some excerpts from the end of year report issued this month by Defence for Children International in Palestine:

“Last year marked 50 years of Israeli military occupation, with no signs of abatement in Palestinian children’s vulnerability to injury and abusive military arrest in the West Bank… Israeli forces’ misuse of crowd control weapons caused critical and permanent injuries to some children while others endured ill-treatment amid high rates of military detention.”

“Israeli forces killed 14 children in the Occupied Palestinian Territory (OPT) during 2017 … In addition, nine-year-old Mohammad Abu Hdaf died on December 6 due to injuries sustained during an Israeli drone strike in the Gaza Strip in 2014.”

“Israeli forces routinely employ the use of excessive force and intentional lethal force in situations not justified by international norms, which in some incidents may amount to extrajudicial or wilful killings … The United Nations Office for the Coordination of Humanitarian Affairs (OCHA) reported at least 961 child injuries at the hands of Israeli forces in 2017.”

“Between February and November, an average of 310 Palestinian children were in the Israeli prison system each month for “security offences,” according to Israel Prison Service (IPS) data. Among them were an average of 60 children between the ages of 12 and 15.”

“Israel has the dubious distinction of being the only country in the world that systematically prosecutes an estimated 500 to 700 children each year in military courts lacking fundamental fair trial rights. Children within the Israeli military system commonly report physical and verbal abuse from the moment of their arrest, and coercion and threats during interrogations.”

“Louay al-Mansi, a Palestinian prisoner in charge of juveniles at Israel’s Ofer military prison, told DCIP that some 78 children arrived in December, more than doubling the number of child detainees to be newly incarcerated in the military facility from the month before.”

“DCIP collected affidavits from 137 West Bank children detained and prosecuted under the jurisdiction of Israeli military courts in 2017. The data shows that 74.5 percent of children endured some form of physical violence following arrest and 62 percent were verbally abused, intimidated, or humiliated.”

“Of the 137 children, 26 were held in solitary confinement for interrogation purposes for an average period of 12 days. The longest period of isolation for a child that DCIP documented in 2017 was 23 days.”