Palestine Podcast #53: The Future of US Policy Towards Palestine

The Palestine Podcast showcases a selection of lectures, talks and interviews featuring leading experts and social justice activists active on the Palestine-Israel issue. Brought to you by the Ireland-Palestine Solidarity Campaign. Click here to view all podcasts. ===== PP#53 – ‘The Future of US Policy Towards Palestine’ with Hatem Bazian and Nadia Hijab [2020-11-02] – (Download here) INFO: Over the past four years, the Trump administration has enacted major long-term changes to US policy with regard to Palestine. With US elections looming, in this episode of the Palestine Podcast, we hear from Al-Shabaka analysts Hatem Bazian and Nadia Hijab who … Continue reading →

The Ireland-Palestine Solidarity Campaign (IPSC) welcomed today’s announcement by the Irish Government regarding the provision of €6 million in extra funding to the UN Relief and Works Agency (UNRWA), which is tasked with overseeing the welfare of Palestinian refugees. However, the human rights organisation also called on the government to do more to help end Israel’s illegal blockade of Gaza which is putting Palestinians at risk during the COVID-19 pandemic and to put pressure on Israel to ensure it meets its legal obligations to provide adequate healthcare to the people of Palestine. IPSC Chairperson Fatin Al Tamimi said: “Palestinian refugees … Continue reading →

In Pictures: Nakba 68 Protest in Dublin

On Saturday 14th May 2016 the IPSC held a march and ‘Moving Gallery’ to commemorate the Palestinian Nakba. Gathering at St. Stephen’s Green a large crowd marched down Grafton Street, around College Green over O’Connell Bridge and ended near the Jim Larkin statue outside the GPO on O’Connell Street. Protestors carried large photographs from Al Nakba, Palestinian and black mourning flags, and a giant key symbolising the Palestinian right of return to their homeland denied them by the State of Israel for 68 years. You can read the leaflet we handed out by clicking here (PDF). The event commemorated what … Continue reading → 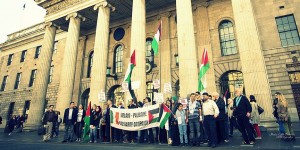 The Palestine Podcast #9: Dr. Yaser Alashqar – ‘Eyewitness to destruction and resistance in Gaza after the 2014 Israeli attack’

The Palestine Podcast showcases a selection of lectures, talks and interviews featuring leading experts and social justice activists active on the Palestine-Israel issue. Brought to you by the Ireland-Palestine Solidarity Campaign. Click here to view all podcasts. ===== PP#9 – Dr. Yaser Alashqar – Eyewitness to destruction and resistance in Gaza after the 2014 Israeli attack [2014-10-29] – (Download here) INFO: Dr. Yaser Alashqar, a Palestianian academic living in Ireland, gave an insightful, important and at times infuriating, eyewitness account of the destruction, and resistance, he observed when he travelled back to his native Gaza just days after Israel’s 2014 … Continue reading → 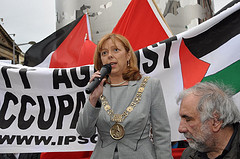 The Chairperson of the European Parliament’s Delegation to the Palestinian Legislative Council (DPLC), Irish MEP Emer Costello (Labour, S&D), has said that she is both astounded and dismayed at the decision of the Israeli authorities to refuse an official visit of the Delegation to Gaza. The visit, which was scheduled to take place between 27th and 30th October 2013, had the full support of Martin Schulz, President of the European Parliament. “Despite interventions by the President Schulz and other distinguished parliamentarians, the Israeli authorities are preventing elected members of an official delegation from paying a humanitarian visit to this ravaged … Continue reading →