On 22 April 2021, representatives of 28 Palestinian families constituting approximately 500 Palestinians from Sheikh Jarrah neighbourhood in occupied East Jerusalem, and 191 endorsing organisations, sent a letter to the Office of the Prosecutor of the International Criminal Court (ICC), calling to urgently include the imminent forced displacement of Palestinians from Sheikh Jarrah as part of the open investigation within the Situation in the State of Palestine. Specifically, the families called on her Office to include as part of the investigation the related war crimes and crimes against humanity, including forcible transfer, appropriation of property, persecution, apartheid, and other inhumane acts causing great suffering … Continue reading →

Palestine Podcast #33: Ilan Pappe on ‘The Biggest Prison on Earth: A History of the Occupied Territories’ 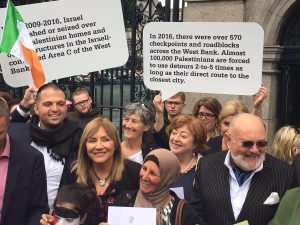 The Ireland-Palestine Solidarity Campaign welcomed today’s Seanad vote (25 in favour, 20 against) in support of Frances Black’s ‘Control of Economic Activities (Occupied Territories) Bill. All parties and most independents in Seanad Eireann, with the exception of the governing party Fine Gael, voted to refer the Bill to the committee stage, the next stage in the process of making a Bill into law. The Bill, if it becomes law, will would prohibit the importation of goods or services from illegal settlements in occupied territories, including Israel’s settlements in Palestine which violate the Geneva Conventions. (Note: If you haven’t yet thanked … Continue reading →

We received some absolutely huge news this week as Fianna Fail announced its intention to support Sen. Frances Black’s bill to ban trade with Israel’s illegal settlements in Palestine. This shift of position is a result of the lobbying carried out by all of you – a real victory for people power! – so we would like to sincerely thank you. With Fianna Fail’s support, this bill will pass in the Seanad, moving on to the committee stage – this will be an historic first step in outlawing the profiteering from the proceeds of illegally colonised land. Those who have … Continue reading →

Dear friends, After fifty years of the occupation of the West Bank and Gaza, the situation for the Palestinian people has never been as bad. At least 60 Palestinians have been killed by Israeli occupation forces since the start of this year, many of them extra-judicially executed or shot during protests. Thousands have been injured. Hundreds of Palestinians, including children, have been imprisoned and likely tortured. Military raids on Palestinian communities occur every day and night, as do attacks by illegal Israeli settlers. People in Gaza are facing into another winter under Israel’s cruel and illegal siege living, while fishermen … Continue reading →