2011 Successes of the Cultural Boycott of Apartheid Israel

2011 was a year full of many successes in the campaign for the cultural boycott of Israel.  This summary will focus on the cultural boycott with emphasis on musical artists and groups. The fall of South African apartheid was preceded by many musical artists who joined to create a movement. That movement became known popularly as “I’m not gonna play Sun City.”  Israel has not yet seen its Sun City moment fully, but as you’ll see, significant rumblings are beginning. January, 2011: Jon Bon Jovi was asked not play in Israel.  Thus far, boycott efforts have been successful.  The singer … Continue reading →

A protest outside the Israeli Embassy sponsored “Israeli Film Days” in Temple Bar turned acrimonious this evening when Gardai broke up a peaceful demonstration by pro-Palestinian activists outside the venue. Citing Section 21 of the Public Order Act, Gardai forcibly removed around sixty activists from the area outside the venue, Filmbase, on Curved Street in Temple Bar, while others were removed from inside the venue. [Images below] Prior to the removal, the protestors had gathered to chant slogans and hand out leaflets explaining why they were opposed to the event. Between 5.30 and 6.40pm the activists held a loud, colourful, … Continue reading →

Irish Ship To Gaza, Press Release, Monday 31 October 2011, 10:30 am Renowned artist Robert Ballagh has donated all royalties from the recent performance of Riverdance in Israel to the Irish Ship to Gaza campaign. As the set designer for Riverdance, Mr. Ballagh had opposed the performance in Israel saying that Israel should be boycotted until Israeli apartheid policies against the Palestinians are ended. Thanking Mr Ballagh for his “principled advocacy of Palestinian human rights”, Dr. Fintan Lane, national coordinator of Irish Ship to Gaza, said: “This generous donation will be well deployed. In fact, the money will be used … Continue reading → 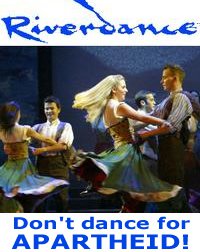 On Tuesday 28th June at 6pm the Ireland Palestine Solidarity Campaign (IPSC) will hold a loud and colourful ‘Don’t Dance for Israeli Apartheid’ protest outside Riverdance’s opening night in the Gaiety Theatre in Dublin. The protest was called to highlight the shameful fact that Riverdance is scheduled to tour Israel this September. The protest forms part of the international Cultural Boycott of Israel campaign which has seen many stars such as Roger Waters, Elvis Costello, Carlos Santana, Christy Moore and Damien Dempsey refuse to perform in Israel.  The Palestinian call for a cultural boycott of Israel – until it ends … Continue reading →