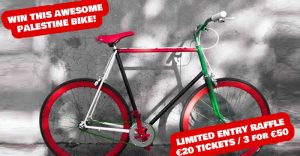 The ‘coalition of change’ is really just a ‘continuity coalition’ for the same old anti-Palestinian oppression, occupation, racism and war crimes.  Much international fawning and fanfare has greeted the news that after 12 years in power in the Apartheid State of Israel, war criminal Benjamin Netanyahu’s Likud party has been ousted and replaced by a shaky coalition deemed the ‘government of change’, whose members range from liberal Zionists to far-right extremists. The Ireland-Palestine Solidarity Campaign sees nothing to celebrate in the changing of the guard in the nuclear-armed Apartheid state that continues to destroy the lives and livelihoods of the … Continue reading →

The Ireland-Palestine Solidarity Campaign (IPSC) welcomes last night’s recognition by the Dáil (Irish parliament) of the de facto Israeli annexation of those parts of the West Bank on which illegal settlements are built. We believe that this recognition represents a very important step towards accountability for Israel’s violations of international law, human rights abuses, and its commission of crimes against humanity, namely Apartheid and Persecution. We hope this will be a watershed moment, that others states will follow suit, and that our government and other states will immediately take action to end these crimes and our complicity with them, to … Continue reading →

PUMA’s new marketing campaign, Only See Great, claims to spark a spirit of “optimism” and “hope.” Yet PUMA remains the main sponsor of the Israel Football Association, which includes teams in Apartheid Israel’s illegal settlements in occupied Palestine. As protests take place across the world ahead of the PUMA shareholders meeting on May 5, take action now to tell PUMA: We don’t need “inspiring” marketing ploys. We need PUMA to stop supporting Israeli apartheid. Click to Tweet at PUMA: Palestinians #OnlySeeApartheid Retired Irish rugby player Duncan Casey says: “Sport is about fair play and inclusion. Those that say sport and … Continue reading →

Statement on the cancellation of our rally, and future actions

Dear friends, unfortunately following legal advice we were forced to cancel our planned Rally for Palestine this Saturday, 15th May, Nakba Day. You can read about the reasons why in this article on TheJournal.ie We are obviously extremely disappointed and frustrated that the Gardaí have said that they will not allow a masked and socially distanced pandemic-safe protest to go ahead at a time when Palestinians need the people of the world to raise their voices against Apartheid Israel’s latest onslaught. So in order to avoid the potential prosecution of members, the IPSC will be organising a number of small … Continue reading →

Allied Universal recently acquired G4S, Allied Universal now has an obligation in accordance with the UN Guiding Principles on Business and Human Rights to cease its involvement in these crimes, which contribute to Israel’s regime of apartheid. We urge Allied Universal to stand on the right side of history. We, the undersigned civil society organizations, write to you regarding your recent acquisition of G4S – which continues to be the target of an international boycott and divestment campaign launched by Palestinian human rights and civil society organizations nine years ago. G4S was identified in 2012 by the then UN Special … Continue reading →

On 22 April 2021, representatives of 28 Palestinian families constituting approximately 500 Palestinians from Sheikh Jarrah neighbourhood in occupied East Jerusalem, and 191 endorsing organisations, sent a letter to the Office of the Prosecutor of the International Criminal Court (ICC), calling to urgently include the imminent forced displacement of Palestinians from Sheikh Jarrah as part of the open investigation within the Situation in the State of Palestine. Specifically, the families called on her Office to include as part of the investigation the related war crimes and crimes against humanity, including forcible transfer, appropriation of property, persecution, apartheid, and other inhumane acts causing great suffering … Continue reading →