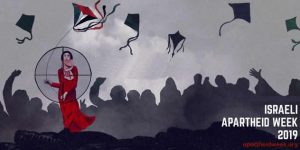 The 15th Annual Israeli Apartheid Week will take place in Ireland between 23rd February and 6th March 2019. IAW is an international series of events that seeks to raise awareness about Israel’s apartheid regime over the Palestinian people and build support for the growing Boycott, Divestment and Sanctions (BDS) movement. It now takes place in over 200 cities across the world, where events such as lectures, film screenings, direct action, cultural performances, postering, among many more help in grassroots organizing for effective solidarity with the Palestinian liberation struggle. Below you can find the events taking place in Ireland. Saturday 23rd … Continue reading →

Sign the Irish Call to Boycott Eurovision 2019 in Israel

Ireland must play no part in the art-washing of Israeli oppression. Palestinian artists, journalists and civil society groups have issued a call for internationals to boycott the 2019 Eurovision due to be staged in Israel, due to Israel’s “regime of military occupation, settler-colonialism and apartheid” which is “shamelessly using Eurovision as part of its official ‘Brand Israel’ strategy”. In solidarity with this call from the oppressed Palestinian people we ask you to join some 17,000 people in signing the Irish petition calling for RTÉ, and all potential participants, to boycott Eurovision 2019 in Israel. CLICK HERE TO SIGN THE PETITION … Continue reading →