We are asking Chris de Burgh to respect the Palestinian boycott call and not to play apartheid Israel on March 29th 2014. Below is a letter we issued to Mr. de Burgh. As we have not received any response since sending it, we are now issuing it as an open letter.  Please like, share and post on the following Facebook page so we can inform him about BDS and ask him not to cross the Palestinian picket line: Chris de Burgh, Don’t Even Fix a Price with Apartheid Israel Palestinian civil society has called for a cultural boycott of Israel. … Continue reading →

On Friday, May 4th, Alan Shatter the Minister for Justice, Equality and Defence, issued an incendiary and defamatory attack on the Ireland-Palestine Solidarity Campaign’s (IPSC) right to engage in peaceful campaigning for a cultural boycott of Israel. In his attack, Alan Shatter tried to spuriously link this peaceful Irish human rights group with Al Qaida.  In doing so the Minister has abused his position; the IPSC calls upon him to withdraw his attack and believes the Irish Government should immediately and publicly dissociate itself from Minister Shatter’s press release. Below is an open letter to Minister Shatter in response to his press … Continue reading → 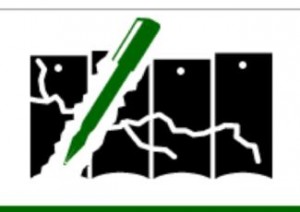 Originially written by Tali Shapiro, a member of the group Boycott From Within, this petition is now a global call for the Red Hot Chilli Peppers to cancel their scheduled performance in Tel Aviv. Already, US, Palestinian, Israeli, Turkish and Lebanese organizations have made requests for the Chili Peppers to not cross the international picket line and respect the Palestinian call for Boycott, Divestment and Sanctions. We will continue to bring to light the injustices that Palestinians face as a result of Occupation and apartheid policies and show why BDS is a moral action for artists – including the Red … Continue reading → 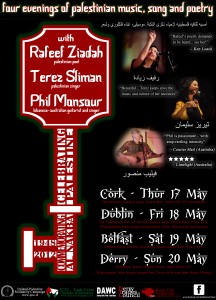 Update (Monday 30th April): Dervish have cancelled their tour of Israel. Full statement below.  The IPSC would like to thank Dervish for refusing to whitewash Israeli apartheid, occupation and war crimes against the Palestinian people. Please consider leaving them a message of support on their Official Facebook Page here. ======= Statement from Dervish, posted to the Official Dervish Facebook page at 11.25am, Monday 30th April: Dervish wish to announce they will not be taking part in the Irish music concert series in Israel this June. Our original decision to participate in the concerts was, like all our tours and appearances, … Continue reading → 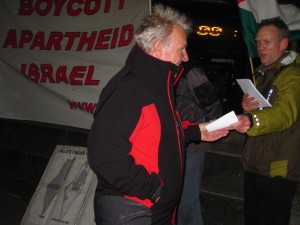 On the cold and dark evening of Thursday 19th January 2012, members and supporters of the Ireland Palestine Solidarity Campaign (IPSC) stood outside Dublin’s National Concert Hall to deliver a simple message to Portuguese Fado signer Ana Moura. That message was: “Please don’t perform in Apartheid Israel!” Holding banners saying “Boycott Apartheid Israel” and “Stop the Ethnic Cleansing of Palestine”, the activists leafleted and engaged with Ana Moura’s fans who were attending the concert, making them aware of Ms. Moura’s plan to play a gig in Tel Aviv on 27th January and explaining how this was in breach of the … Continue reading →